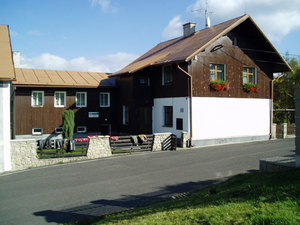 The game park Hájek lies in Podkrušnohoří (the Sub-Ore Mountains area), 6 kms to the North-East of Karlovy Vary between the communities of Hájek, Velký Rybník, and Sadov. It was established in 1969. The size of the game park is 418 ha, of which 287 ha are consisted of forest, 113 ha of meadows, 8 ha of waters (ponds), and 10 ha of other areas. The game park is subdivided into three sections – fallow deer, moufflon, and boar ones, which are isolated from each other with a separating fence.

Every hunting guest have to has a valid shooting licence and has to be properly insured against injury causes by perfoming justice of hunting. Everyone hunting guest will be assigned by hunting guide and hunting permit will be made out.The game park includes as its part also a hunters chalet (see illustration) offering accommodation all year round. In the year 2002 a gamekeeper’s lodge was established there as the apartment for the game park administrator (see illustration).